If you want to learn how to play Texas hold’em games, then you need to start from the basic rules and hands. That’s exactly what you’ll find on this beginner’s guide to the game.

Texas hold’em is a simple poker game, but it can be daunting to get to grips with.

But don’t let that put you off. By the time you are down with this beginner’s guide to Texas hold’em, you will know:

1. What Is Texas Hold’em Poker?

Texas Hold’em is the most popular of all poker variations.

It takes a moment to learn, but a lifetime to master.

Discovering how to play Texas hold’em poker is not difficult and the simplicity of its rules, gameplay, and hand-ranking all contribute to the popularity of the game.

So how do you play Texas hold’em?

The goal of a Texas hold’em game is to use your hole card and in combination with the community cards to make the best possible five-card poker hand.

Hold’em is not unlike other poker games like five-card draw.

However, the way players construct their hands in Texas hold’em is a little different than in draw poker.

It’s always possible a player can “bluff” and get others to fold better hands. 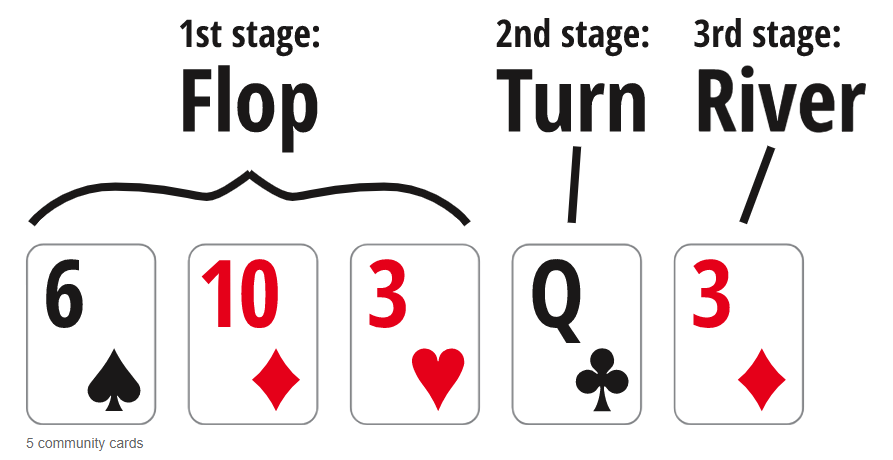 While we will see each betting round and different phase that forms a full hand of a Texas hold’em game, you should know that the five community cards are dealt in three stages:

Your mission is to construct your five-card poker hands using the best available five cards out of the seven total cards (the two hole cards and the five community cards).

If the cards on the table lead to a better combination, you can also play all five community cards and forget about yours.

In a game of Texas hold’em you can do whatever works to make the best five-card hand.

If the betting causes all but one player to fold, the lone remaining player wins the pot without having to show any cards.

For that reason, players don’t always have to hold the best hand to win the pot. It’s always possible a player can ‘bluff’ and get others to fold better hands.

If two or more players make it all of the way to the showdown after the last community card is dealt and all betting is complete, the only way to win the pot is to have the highest-ranking five-card poker hand.

Now that you know the basics of Texas hold’em and you start to begin gaining an understanding of how the game works, it’s time to get into some specifics.

These include how to deal Texas hold’em and how the betting works.

Let’s have a look at all the different key aspects of a Texas hold’em game, including the different positions at the table and the betting rounds featured in the game.

The play moves clockwise around the table, starting with action to the left of the dealer button.

The ‘button’ is a round disc that sits in front of a player and is rotated one seat to the left every hand.

When playing in casinos and poker rooms, the player with the dealer button doesn’t deal the cards (the poker room hires someone to do that).

In when you play poker home games with friends the player with the button usually deals the hands.

The button determines which player at the table is the acting dealer.

The first two players sitting to the immediate left of the button are required to post a ‘small blind‘ and a ‘big blind‘ to initiate the betting.

From there, the action occurs on multiple streets:

Each one of these moments (or ‘streets’ in the game’s lingo) is explained further below.

The button determines which player at the table is the acting dealer.

In Texas hold’em, the player on button, or last active player closest to the button receives the last action on all post-flop streets of play.

While the dealer button dictates which players have to post the small and big blinds, it also determines where the dealing of the cards begin.

The player to the immediate left of the dealer button in the small blind receives the first card and then the dealer pitches cards around the table in a clockwise motion from player to player until each has received two starting cards. 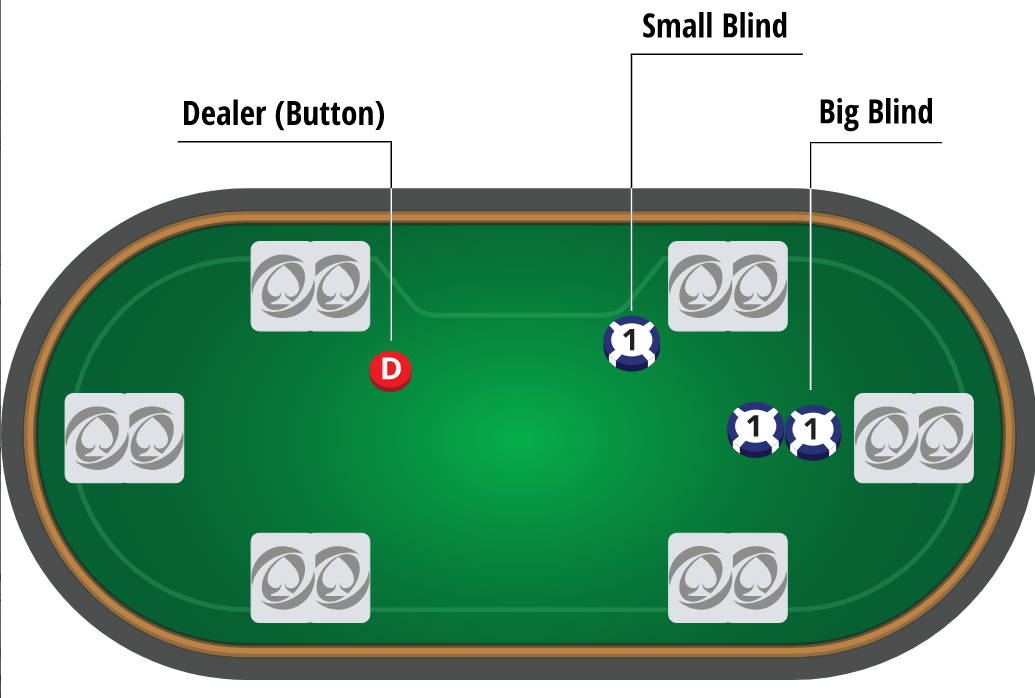 Before every new hand begins, two players at the table are obligated to post small and big blinds.

The blinds are forced bets that begin the wagering.

Without these blinds, the game would be very boring because no one would be required to put any money into the pot and players could just wait around until they are dealt pocket aces (AA) and only play then.

The blinds ensure there will be some level of ‘action’ on every hand.

In tournaments, the blinds are raised at regular intervals.

The player directly to the left of the button posts the small blind, and the player to his or her direct left posts the big blind.

The small blind is generally half the amount of the big blind, although this stipulation varies from room to room and can also be dependent on the game being played.

The first round of betting takes place right after each player has been dealt two hole cards.

The first player to act is the player to the left of the big blind.

This position referred to as ‘under the gun‘ because the player has to act first. The first player has three options:

If the player chooses to fold, he or she is out of the game and no longer eligible to win the current hand.

Players can bet anywhere from the amount of the big blind (the minimum bet allowed) up to the total amount in the current pot.

The amount a player can raise to depends on the game that is being played.

In a game of no-limit Texas hold’em, the minimum opening raise must be at least twice the big blind, and the maximum raise can be all of the chips a player has in his or her stack (an “all-in” bet).

There are other betting variations in hold’em poker.

In fixed-limit hold’em (or just “limit hold’em), a raise is always exactly twice the big blind.

In pot-limit hold’em (played much less often than the other variations), players can bet anywhere from the amount of the big blind (the minimum bet allowed) up to the total amount in the current pot.

After the first player (‘under the gun’) acts, the play proceeds in a clockwise fashion around the table with each player also having the same three options — to call, to raise, or fold.

Once the last bet is called and the action is ‘closed,’ the preflop round is over and play moves on to the “flop.”

Second Betting Round: The Flop

After the first preflop betting round has been completed, the first three community cards are dealt and a second betting round follows involving only the players who have not folded already.

A check simply means to pass the action to the next player in the hand.

In this betting round (and subsequent ones), the action starts with the first active player to the left of the button.

Along with the options to bet, call, fold, or raise, a player now has the option to ‘check‘ if no betting action has occurred beforehand.

A check simply means to pass the action to the next player in the hand.

Again betting continues until the last bet or raise has been called (which closes the action).

It also can happen that every player simply chooses not to be and checks around the table, which also ends the betting round.

Third Betting Round: The Turn

Call – match the amount of the big blind

The fourth community card, called the turn, is dealt face-up following all betting action on the flop.

Once this has been completed, another round of betting occurs, similar to that on the previous street of play.

Again players have the option to options to check, bet, call, fold, or raise.

Final Betting Round: The River

Fold – throw the hand away

The fifth community card, called the river, is dealt face-up following all betting action on the turn.

Once this has been completed, another round of betting occurs, similar to what took play on the previous street of play.

Once more the remaining players have the option to options to check, bet, call, fold, or raise.

After all betting action has been completed, the remaining players in the hand with hole cards now expose their holdings to determine a winner. This is called the showdown.

The remaining players show their hole cards, and with the assistance of the dealer, a winning hand is determined.

The player with the best combination of five cards wins the pot according to the official poker hand rankings.

3. The Hands in Texas Hold’em

Players construct their hands by choosing the five best cards from the seven available (their two hole cards and the five community cards).

Learning hold’em poker begins with understanding how hands are dealt and the order of play as described above.

Of course, learning Texas hold’em rules is just the beginning, as the next step is to learn strategy which involves understanding what constitutes good starting hand selection, the odds and probabilities associated with the game, the significance of position and getting to act last during those post-flop betting rounds, and many other aspects of the game.